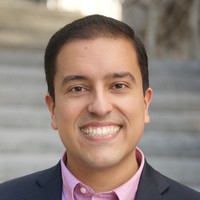 Edgar Velázquez-Armendáriz is a Member of Technical Staff at Pure Storage in San Francisco, California. Previously he was a Senior Software Engineer at Autodesk, Inc. (2014-2020). His research interests include predictive rendering, real-time computer graphics, high performance computing, applications of massively parallel processors, systems, and topics at the intersection of science and art.

Edgar was born in Mexico City. He received the B.S. degree in Computer Systems Engineering from the Tecnológico de Monterrey, Campus Estado de México, in 2006, and the M.S. and Ph.D. degrees in Computer Science from Cornell University, in 2014. During his graduate studies he worked in the first instance with Prof. Kavita Bala. During the second part of his Ph.D. program we was advised by Prof. Donald P. Greenberg, founder and director of the Program of Computer Graphics at Cornell.

When not in front of a computer, Edgar may be found playing the piano, trying to improve his Italian to further enjoy opera, practicing salsa and ballroom dancing, or reading about art and universal history.